“You took my son’s life […] I can’t get that back. I can’t hold him no more. I can’t hear him calling me ‘daddy’ no more. I can’t kiss him no more. I can’t play with him no more.” On Monday July 16, the life of one-year-old Davell Gardner Jr. was abruptly ended by a bullet through his stomach. His family was attending a family cookout. The motive of the assailants, both of whom got away, is still unclear. Sadly, this was but one of many tragedies that have plagued an already tumultuous Summer.

While we rightly express shock at sudden, horrific disasters, the suffering of innocent people is not a new phenomenon. Think about a friend or relative who has experienced a life-altering disease or injury. Maybe they were diagnosed with cancer or MS. Maybe they were paralyzed in a car crash by a drunk driver. Maybe they were born with a disability or deformity. Beyond our cozy American shores are nightmares of ideological persecution, poverty, and exploitation. Thousands of children, in particular, are killed every day by hunger, disease, violence, and hard labor. Our first-world setting has accustomed us to understand suffering as a form of justice. Those who are guilty must suffer. But what crime have children in Africa, young cancer victims, and aborted fetuses committed? Existing?

Throughout history, Christianity has wrongfully been accused of dodging these problems of suffering. “How could God let this happen?” is not a new question. If anything, it is the central inquiry that motivates all religions. Why do people kill each other? Why do people die? Why do bad people get away with injustice?

There is a terrifying scene in the Book of Leviticus in which Aaron’s sons botch their sacrifice to God and are consumed by fire as a result. While the Bible usually details the flaws of failed sacrifices, there is no such explanation in this circumstance. Just as Aaron lost His two sons without justification, the swift demise of a friend or a loved one can come out of nowhere.

“There is no god besides you who have the care of all,
that you need show you have not unjustly condemned.” (Wis 12:13)

Is this really a caring God? One who allows His people to suffer so much, often without explanation? Is He not flawed? Malicious? Sadistic? Perhaps Friedrich Nietzsche was correct in His observation: “In Christianity neither morality nor religion come into contact with reality at any point.” The Christian notion of a just and loving God does not seem to make sense in a world in which one-year-olds get shot because they were born in the wrong part of town.

Despite what its critics claim, Christianity frequently engages with the reality of suffering. In the parable of the sower, the master plants his seeds in a field, which fail to germinate because they are choked up by weeds. However, rather than question the quality of the soil, his servants immediately assume the master’s incompetency in sowing. When they ask the master if they should pull up the weeds, he remarkably says:

“He replied, ‘No, if you pull up the weeds
you might uproot the wheat along with them.
Let them grow together until harvest;
then at harvest time I will say to the harvesters,
“First collect the weeds and tie them in bundles for burning;
but gather the wheat into my barn.”’ (Mt 13:24-43)

Just as the master casts His seeds into a rocky terrain, we are thrown into a world of suffering.

Several Eastern cultures believe in the Yin and the Yang. The familiar symbol depicted below symbolizes the necessity of a balance between what is perceived as good and evil. In many Eastern spiritualities, good and evil work together, and existence as we know it could not function without either. For Christianity, an authentic human love for God is impossible without choice. To love God, we must risk rejecting God. But while many Eastern cultures accept evil as native to the universe, Christianity yearns for a return to a time in which evil was foreign. Adam and Eve were born into a Garden of goodness, yet they chose to leave. As a result, their descendants are born outside of the Garden and must choose to enter it. 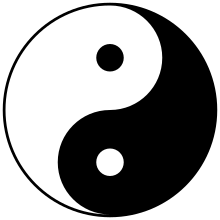 Our modern Western mode of thinking has fostered a sense of cushy entitlement. Having dodged generations that fought for their freedom, we Millennials and Generation Z were born with spoons of liberty in their mouths. This, combined with a radical individualism that our nation enjoys, fosters a demand for fairness. We feel owed fairness because we were born into a world of fairness. And when life is not fair, we become bitter and resentful of the One who gives us life, Himself.

Indeed, life is not fair, but not because of the suffering of innocents. Life is not fair because our betrayal of God’s love warrants our extermination. We have never deserved to live and thus our deaths, no matter how untimely they are, have nothing to do with fairness. All who die, regardless of age, did nothing to deserve life. This is why when Job, the righteous man who lost everything, curses his existence, God asks:

“Where were you when I laid the foundation of the earth?
Tell me, if you have understanding.
Who determined its measurements—surely you know!
Or who stretched the line upon it?
On what were its bases sunk,
or who laid its cornerstone
when the morning stars sang together
and all the heavenly beings shouted for joy?” (Job 38:4-7)

The weeds in our gardens constitute an invisible enemy. Growing from within us, fusing to our essences, they are like the thorns of a rose bush. They gradually choke out the surrounding area unless they are tamed. A beautiful garden cannot exist without the risk of overgrowing. While God could have made us as docile, like animals, He instead imbued us with the ability to be our own gardeners. At the end of the day, God will inspect our gardens, and he will immortalize us inside the gardens that we tended to, whether they are like Eden or like a dead rose bush.