The Best in Catholic Memes: March

By Nick Jones, The University of Rhode Island

Since I last wrote one of these, all of my reasons for needing memes have gotten much more dire. The pandemic is going to get a lot worse before it gets better. This Lent was much Lentier than any other we’ve seen. College just got a whole lot harder for all students, especially the seniors. Tom Brady is a Tampa Bay Buccaneer. (That one REALLY stung.) But, Easter loomed large. Even if we couldn’t get to Mass on that day, we ought to still rejoice over the living reality the day commemorates. Joy is, after all, one of the Fruits of the Holy Spirit. So, here’s hoping these memes’ll foment some joy in you until you can meet Him who is the source of all joy. 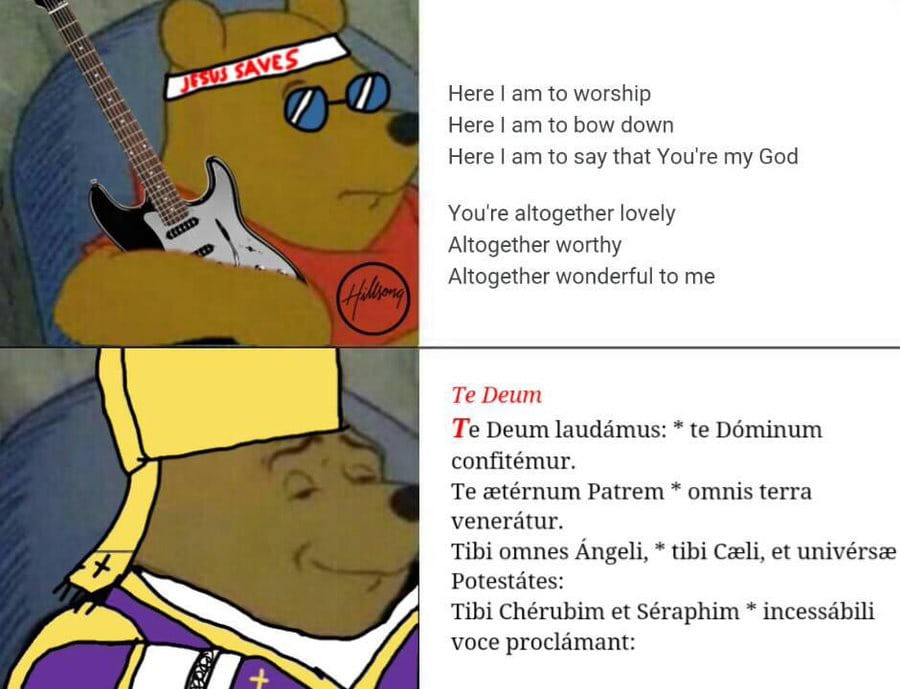 The Church has a preference for musical style, Gregorian Chant. The Church has a preference for musical accompaniment, the Organ.  The closer a song gets to these ideals, the more well suited it is to Divine worship. We shouldn’t choose a song just because we think it’s catchy or it makes us “feel” God.  There we run the risk of emotivism or worse yet we make the liturgy about ourselves. God is there especially when we can’t feel it. The liturgy, as sacrifice, should never be about what we take away, but rather what we give. 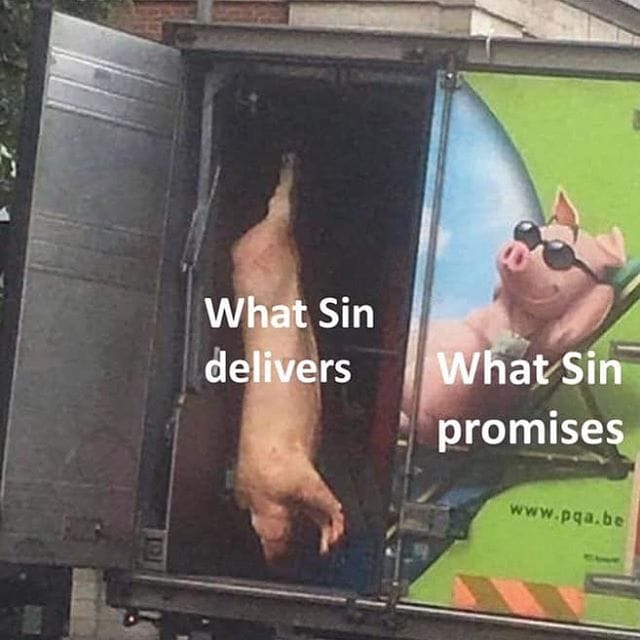 “The wages of sin is death…” -Romans 6:23.  There’s no way around this. Nothing good comes from sin. “iT’S JusT VeNiAL sIn!”, you might say.  But even venial sin weakens our spiritual life and predisposes us more readily to commit mortal sin. Every sin makes us worse off than we were before we committed it.  Every sin offends God and contributes to the need for Calvary. 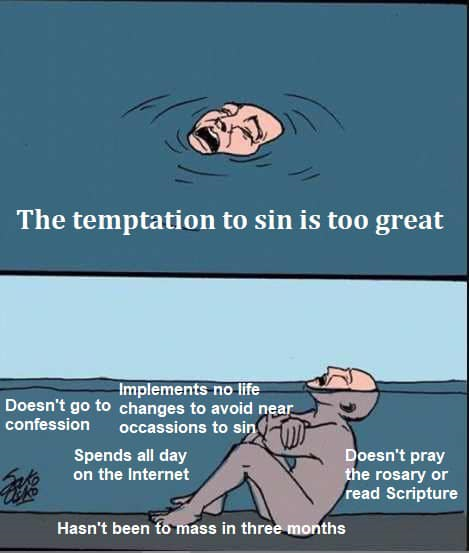 This one is tough, but so was Christ.  Obviously, He shows mercy to all who are sorry.  That is, however, just step one. The traditional Act of Contrition ends with “I firmly resolve with the help of Thy grace to sin no more and to avoid the near occasion of sin.” Our Lord forgave the Woman Caught in Adultery, but He likewise told her, “Go and sin no more.”  We aren’t doing ourselves any favors when we remain obstinate in vices and don’t seek to remove their sources in our life. We can’t expect to have fortitude if we don’t avail ourselves to the graces of Confession and the Most Holy Eucharist. When we don’t look to Our Lady’s help or seek to encounter the written, living Word of God, we’re just shooting ourselves in the foot.  Our Lord tells us through Saint Paul, “No temptation has overtaken you that is not common to man. God is faithful, and he will not let you be tempted beyond your strength, but with the temptation will also provide the way of escape, that you may be able to endure it.” -1 Corinthians 10:13. Sin is always a choice and so is virtue. Which will we choose? 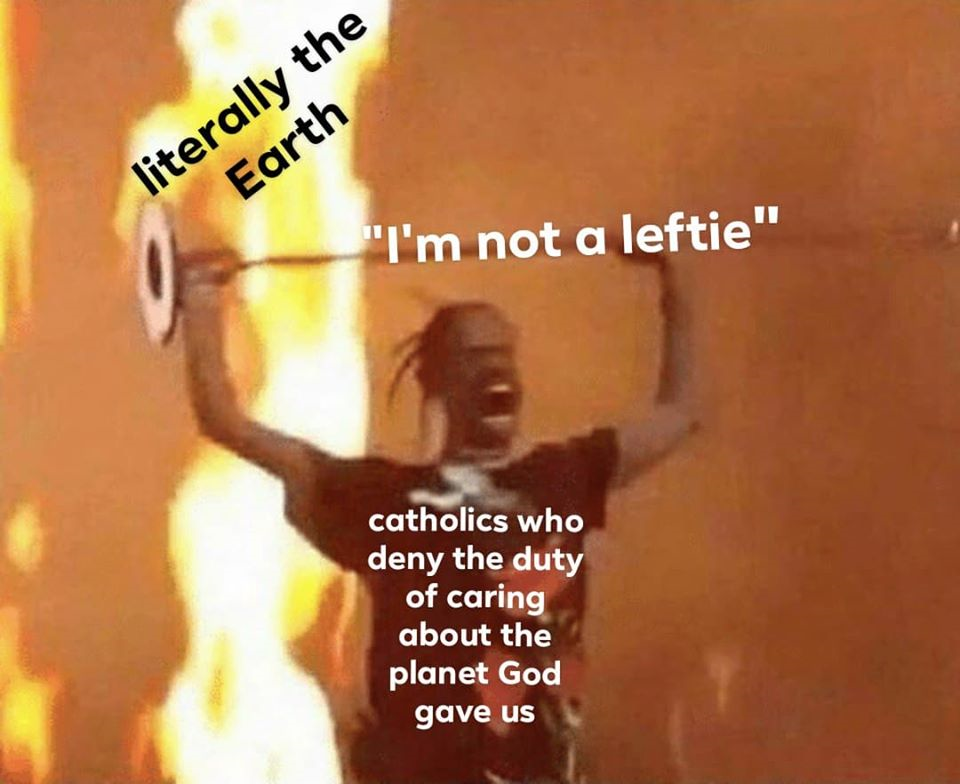 Stewardship over the Earth is one of the earliest responsibilities God entrusts to us.  There’s nothing political about that. We might disagree over how to best care for the planet, but there’s no denying that it needs to be cared for. We surely can fall into sin when we don’t do our best to limit our detrimental impact on the planet. It is important to recognize that this is not a sin against “Mother Earth”, but rather our Father, God. It is not possible to sin against something which is not a person. We have a duty to keep the Earth clean and beautiful, just as God gave it to us, until He comes again. 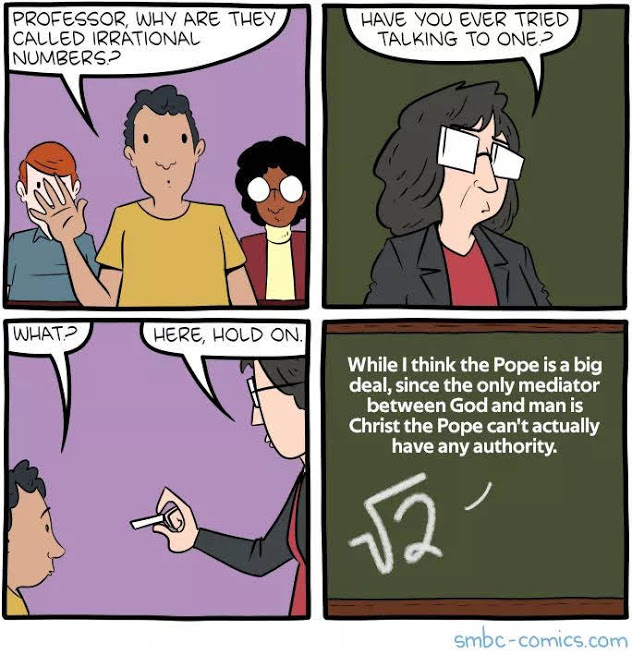 “In the power of the same Holy Spirit, Peter, both the chief of the apostles and the keeper of the keys of the kingdom of heaven…” -Saint Cyril of Jerusalem, Catechetical Lectures, AD 350. ” “The Lord says to Peter: ‘I say to you,’ he says, ‘that you are Peter, and upon this rock I will build my Church, and the gates of hell will not overcome it. … ’ [Matt. 16:18]. On him [Peter] he builds the Church, and to him he gives the command to feed the sheep [John 21:17], and although he assigns a like power to all the apostles, yet he founded a single chair [cathedra], and he established by his own authority a source and an intrinsic reason for that unity. . . . If someone [today] does not hold fast to this unity of Peter, can he imagine that he still holds the faith? If he [should] desert the chair of Peter upon whom the Church was built, can he still be confident that he is in the Church?” -St. Cyprian of Carthage, The Unity of the Catholic Church, AD 251. Either the Fathers immediately misunderstood what Christ said about the papacy, or those who argue against the papacy haven’t read their history. Which one seems more reasonable? The Fathers were Catholic, so we are too. 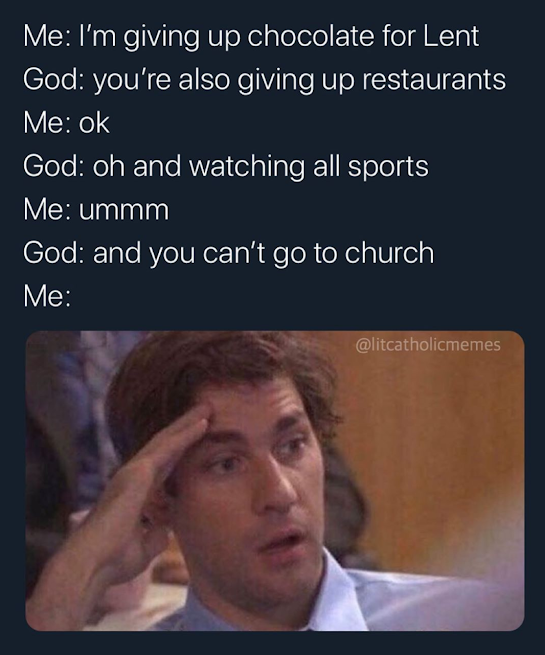 “Then Job arose, and rent his robe, and shaved his head, and fell upon the ground, and worshiped. And he said, “Naked I came from my mother’s womb, and naked shall I return; the Lord gave, and the Lord has taken away; blessed be the name of the Lord.  In all this Job did not sin or charge God with wrong.” -Job 1:20-22. Who are we to demand anything from God? Who are we to suggest that God somehow owes us something? For whatever reason, the Lord is asking us to go through this current trial. That God is good and always saves His people should inspire us to Hope. This Lent, as long as this crisis lasts, the Lord is asking us to consider what really matters and to walk away from that which doesn’t. 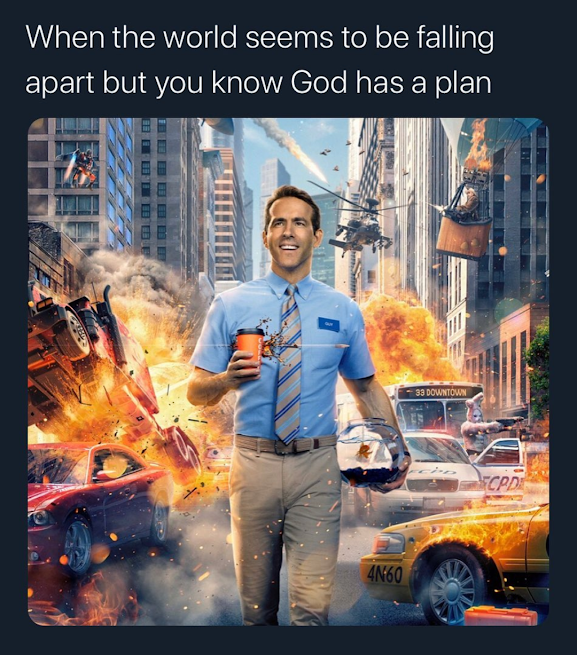 “For I know the plans I have for you, says the Lord, plans for welfare and not for evil, to give you a future and a hope.” -Jeremiah 29:11. God wins in the end. Consider Saint Paul’s Letter to the Romans, where he reminds them their current afflictions cannot separate them from the love of God (cf. Romans 8). If we die with sanctifying Grace in our souls, what more could we need? Of course, that’s a big if. Thanks be to our most indulgent and Clement God. 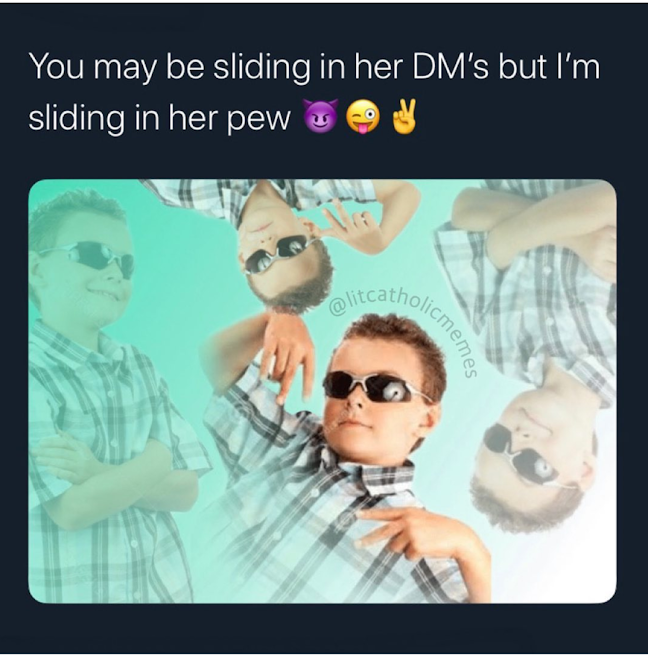 “Unless the Lord builds the house, those who build it labor in vain.” -Psalm 127:1. Shared hobbies and tastes are cool, but shared Faith is cooler. We know the temporal goods that might come from a relationship where the Faith isn’t present can still be pretty good. The temporal goods from a relationship built on the firm foundation of the Faith can be even better. But the Eternal Salvation that is more readily furthered by a holy relationship predicated upon a growth of virtue? That’s the real prize. 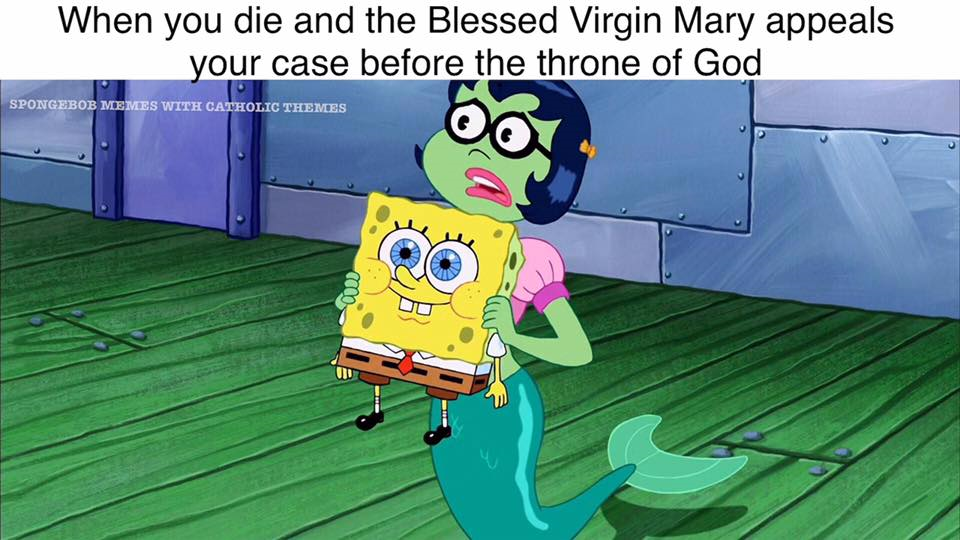 How could we spurn the love of so magnificent an intercessor? How could we say no to the love of our Immaculate Mother? She and the saints over whom she reigns live solely to glorify God and to intercede for us poor sinners here below. They can pray for us even when we can’t do it for ourselves. Let’s all devote ourselves to Mary more perfectly, so that we might someday come under her Celestial Queenship, worshipping our common Lord and God with her. 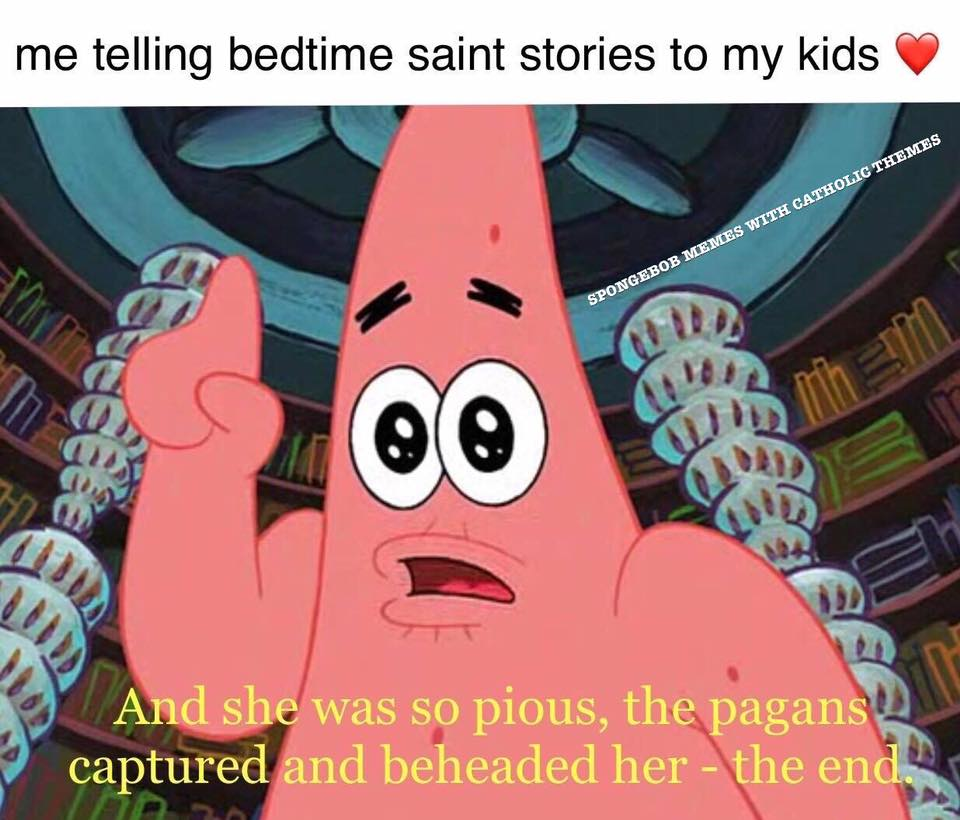 Virtue mortifies our fleshly urges. In many cases, it leads to physical death. It’s not the virtue itself that kills us, but those who despise it and the Lord killing us. But such a death leads to Eternal Life. The juice is very much worth the squeeze. Vice promises and delivers fleshly pleasure. But at the same time, it can kill the physical body. And, it’s likely that a bodily death at the hands of vice will lead to Eternal Death. Take your pick, I’m going to roll with virtue. 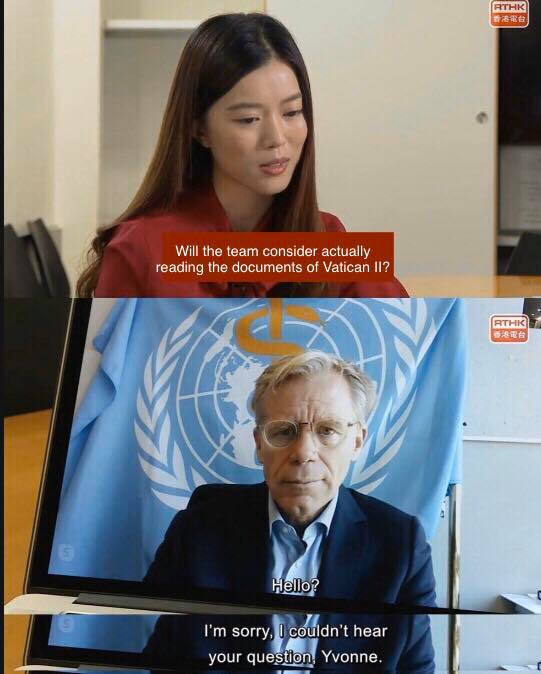 Here are some things the documents of Vatican II said. Latin should remain in use for at least part of the Mass in the Roman Rite. People should be trained so that they can sing some Latin Mass parts. These parts should ideally be Gregorian Chant. The people should be instructed so as to understand what is actually happening at Mass (cf. Sacrosanctum Concilium). The Church’s sole mission is to prepare people to meet God so that they might achieve salvation (cf. Gaudium et Spes 45).  The Scriptures are holy and inspired and profitable for our salvation. All Christian should know them well (cf. Dei Verbum).  The Church is the means of salvation for all people. Of all created beings, Mary please a particularly unique and most supreme position in the economy of salvation (cf. Lumen Gentium). All of that sounds super Catholic to me. That’s probably because it was actually an inspired ecumenical council, through which the Church exercised her extraordinary magisterium. On the other side, you’ll be hard-pressed to find any of the weird, heterodox platitudes so often championed by those who claim to be influenced by the “Spirit of Vatican II”.

PrevPreviousThe Stations of the Cross from across the Country
NextThe Jesuits Sank the Titanic? Five Jesuit ShenanigansNext