The Uighurs: China’s other Tibet

By Christopher Lukas, The Catholic University of America

Much like Tibet, Xinjiang has long been a tumultuous region for China to control. However, China is now hardening its position in the province, and the world has noticed. Xinjiang is a province in western China, and is the historic home of the Uighurs, a Central Asian Muslim people, with cultural links to places like Tajikistan and Kyrgyzstan. This cultural identity has been seen as a threat to the authority of the Chinese Communist Party (CCP). For the Chinese state, religious values that are inconsistent with party doctrine are a threat, and those who hold such values must be dealt with. Therefore, the Chinese state has resolved to dismantle the culture of the Uighur community using methods with a haunting resemblance to genocides of the past.

Hundreds of Uighur men and women appear to be blindfolded as they are led off a train.

Currently, the Uighur population of Xinjiang is facing efforts by the Chinese State to destroy its culture and integrate the province with the rest of China. Many Uighurs have been imprisoned in reeducation camps, where they are conditioned to abandon their Muslim identity, and accept values more compatible with the CCP. In these camps they are reportedly forced to break Islamic religious practice by consuming alcohol and pork, among other offenses. Many people have reported loved ones disappearing inside these camps, as well as other forms of torture and degradation to human dignity. Innocent families have been torn apart, and people are forced to forfeit their entire identity. The marginalized people of this region have suffered a suffocating level of oppression, forcing them to surrender all that they are and submit. The treatment of the Uighurs, not unlike the treatment of Tibetan Buddhists, has been an offense to humanity. Many have called this a genocide. Xinjiang has turned into a police state, with an enormous security system monitoring the province. To further dilute Uighur power, Han Chinese populations have been moved into the area to take up jobs in state-funded economic investments, pushing the indigenous people out of the economy.

It is difficult to find accurate news reporting on what has happened in Xinjiang, because of tight controls on information. Journalists are frequently barred from visiting the area, and China denies most accusations against them. Some of the best information we do have, has come from refugees that have come to settle in the West under asylum protections.

As Catholics, this issue is surprisingly close to us. The Church has been making efforts to grow in China, and as we make progress, our brothers and sisters in China also face persecution. In a more direct way, however, we are called by Catholic Social Teaching to solidarity, which is a value extended to all members of the human family. To stand in solidarity with our human family, we must understand injustices of this nature to be a threat to human dignity everywhere. Additionally, holding an awareness of various cultures and their struggles, allows us to attempt to empathize on a spiritual level, bettering our relationship with love itself, with God.

The situation can seem hopeless, as the Chinese hold such a tight grasp on the region. Yet there are a few things our nation can do. The current administration has taken a tougher stance on both China and global religious freedom, both very admirable. However, our immigration system’s asylum process is one of the greatest tools we have to promote religious freedom and protect the human dignity of others. Yet it is often not seen in this light. This system not only helps save those who benefit from it, but promotes “global good behavior” by giving those who fight for their own rights in their own nations an escape hatch. Receiving refugees does project power, yet it is an action deeply rooted in personal responsibility. It is also an action authoritarian oppressors cannot take. If humanity looks to the spiritual messages of solidarity and personal responsibility, we can overcome injustices, like those facing the Uighurs, one day. But for now, we must remain committed to learning of their plight, fight for a smooth asylum process, and pray that we may be peacebuilders. 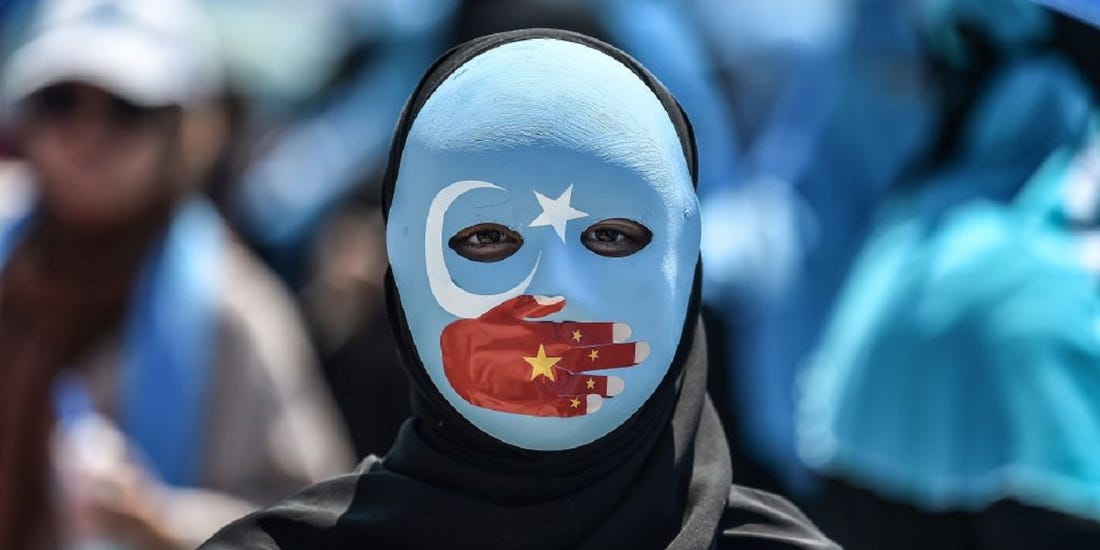 A protestor wears a mask symbolizing the oppression of the Uighurs

PrevPreviousLife Isn’t Fair: Here’s Why
Next“Blessed are the Poor in Spirit”: Debunking the Prosperity GospelNext