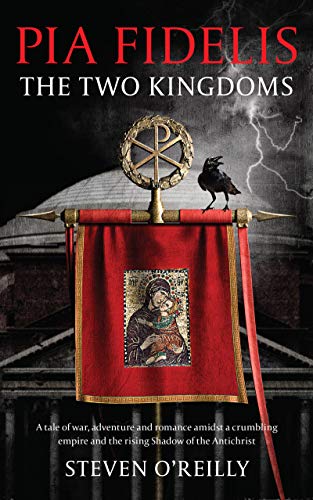 The Roman Empire of 351 AD is a completely different world from the Rome of Augustus.  Splintered into two separate realms by succession squabbles, it covers much of Europe but is weakened by barbarians and political unrest.  Eastern emperor Constantius, the son of Constantine the Great, tries to amass his own power by suppressing the efforts of so-called “Usurper” Magnentius to rule Rome and the west.  The civil war, historically documented, lasts three years; its key moments are the battles of Mursa Major and Mons Seleucis. Meanwhile, the Christian Church, barely past its era of persecution, faces new challenges.  Arianism, deceptively similar to Christianity, has spread swiftly throughout the whole realm, gained enormous popularity, and infiltrated most of the Eastern government and- alarmingly- the church hierarchy.  Traditional Christians often find themselves on the emperor’s wrong side.  Alongside all this, many Romans continue to practice the old polytheistic religion, and a popular interest grows occult practices derived from it. Against this ominous political and religious backdrop, Steven O’Reilly’s novel Pia Fidelis chronicles the political intrigues, love interests and military adventures of a large cast of characters who represent nearly every viewpoint in the conflict.

We first meet Marcus Septimus, a tribune from Rome who has sworn loyalty to Magnentius in the civil war.  High-minded, of the old Roman religion, and always proffering an appropriate quote from Cicero or Virgil, he is devoted to his legion but also sad to be separated from his beloved fiancee, Marciana, back at home, something he struggles with more and more as the civil war wears on. O’Reilly describes the daring adventures of Septimus’ legion in vivid and sometimes painful detail—a scene involving some of the legionaries burning a bridge to foil their enemy’s plans to advance takes 16 pages, for example—which strongly underscores the sense of how slowly time passes when one is mired in war.  O’Reilly also gives the conflict a Christian-Arian dimension; Septimus’ legion, Third Italica (of some historical fame) is mostly composed of Christians; they have traditional ties to, and fight under the same Chi-Rho standard as Constantine the Great; and their ranks include Father Paul, a brave, loyal and somewhat anachronistically described Catholic chaplain.

Between descriptions of the civil war, O’Reilly also spins out a tale of intrigue and advancement among Eastern Emperor Constantius’ men.  The fierce ambition and desire for power that fills Constantius’ court is a far cry from the old-fashioned honor code by which the soldiers of Third Italica live.  Constantius is an efficient and able ruler who often shows his human side; he eats with noblewomen, enjoys recounting childhood memories, grieves for his wife when she dies, and (after some time has elapsed) flirts with Melissa.  He rules powerfully, consolidating his power, stamping out opposition and using his many advisors and hangers-on to his advantage. They run the gamut of every kind of hunger for power. Silvanus and Leontius, for example, both defect from the western army once their cause in the civil war begins to seem futile. Leontius in particular uses his rank to isolate and intimidate the Christian pope, Liberius, and bishop, Athanasius, and try and force them to cooperate doctrinally with the Arian Christians to promote unity in the empire. Eusebius and Arbitio, eager for praise and promotion by the emperor, hunt down Constantius’ rival and cousin Gallus and brutally kill him when he resists them (then lie to cover up their actions, which are unsanctioned by the emperor)  Their companion and Gallus’ one-time friend, Marcus, is initially shocked and disturbed, but Arbitio assures him that this is the way things work in the imperial court with there chilling quote: “You cannot be too rigid [with your conscience]…in time difficult decisions will become less so. One day, you will feel nothing at all.”

O’Reilly introduces the reader to yet another angle of the story through the intrigues of Melissa. Perhaps the heroine of the tale, Melissa is the daughter of a general who accompanies the Eastern army on their campaign in central Europe, befriending nobility and rubbing shoulders with eligible men along the way. Florentius, her father, attempts to marry her off to Lucius, a pleasant and virtuous but crippled young man, bypassing the offers of other supposedly more “desirable” prospects (including the emperor himself!) for Lucius’ Christian faith.  Melissa resists, invoking “romantic love” as the only thing she will settle for; Lucius quickly realizes she is spurning him. Tragically, he tries to prove himself to her, goes into battle unprepared and is fatally wounded. Perhaps Melissa learns a lesson or two in the process about balancing love and responsibility in marriage and how rare, indeed, a reliable and solid man is! At the close of the book, she is again an open prospect for many eager eyes including the Emperor; one wonders whether Christian or Arian will ultimately win out in her love life.

The end of Pia Fidelis left me missing certain characters such as Lucius and sad that the western cause had failed. Yet, the thrilling and fast-paced chase scene that O’Reilly inserts in the last chapter makes up for all this, bringing all the different characters in the novel together and creating a true cliff-hanger ending. I look forward to hearing more of these many memorable characters in the subsequent books of the trilogy!

A copy of this book was generously provided by Steven O’Reilly, its author. His work can be found here!

2 comments on “Intrigue and Advancement: Review of Pia Fidelis”