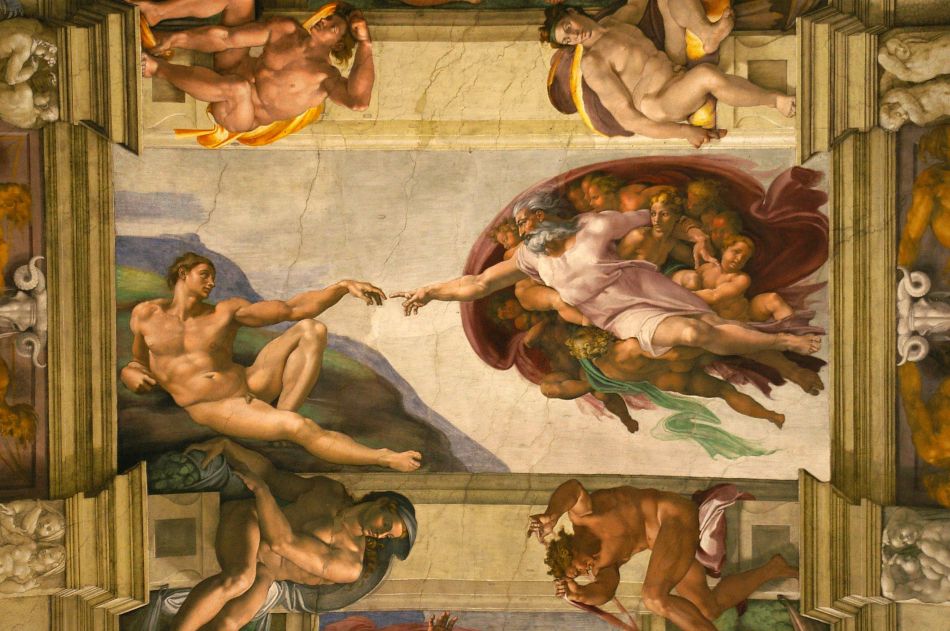 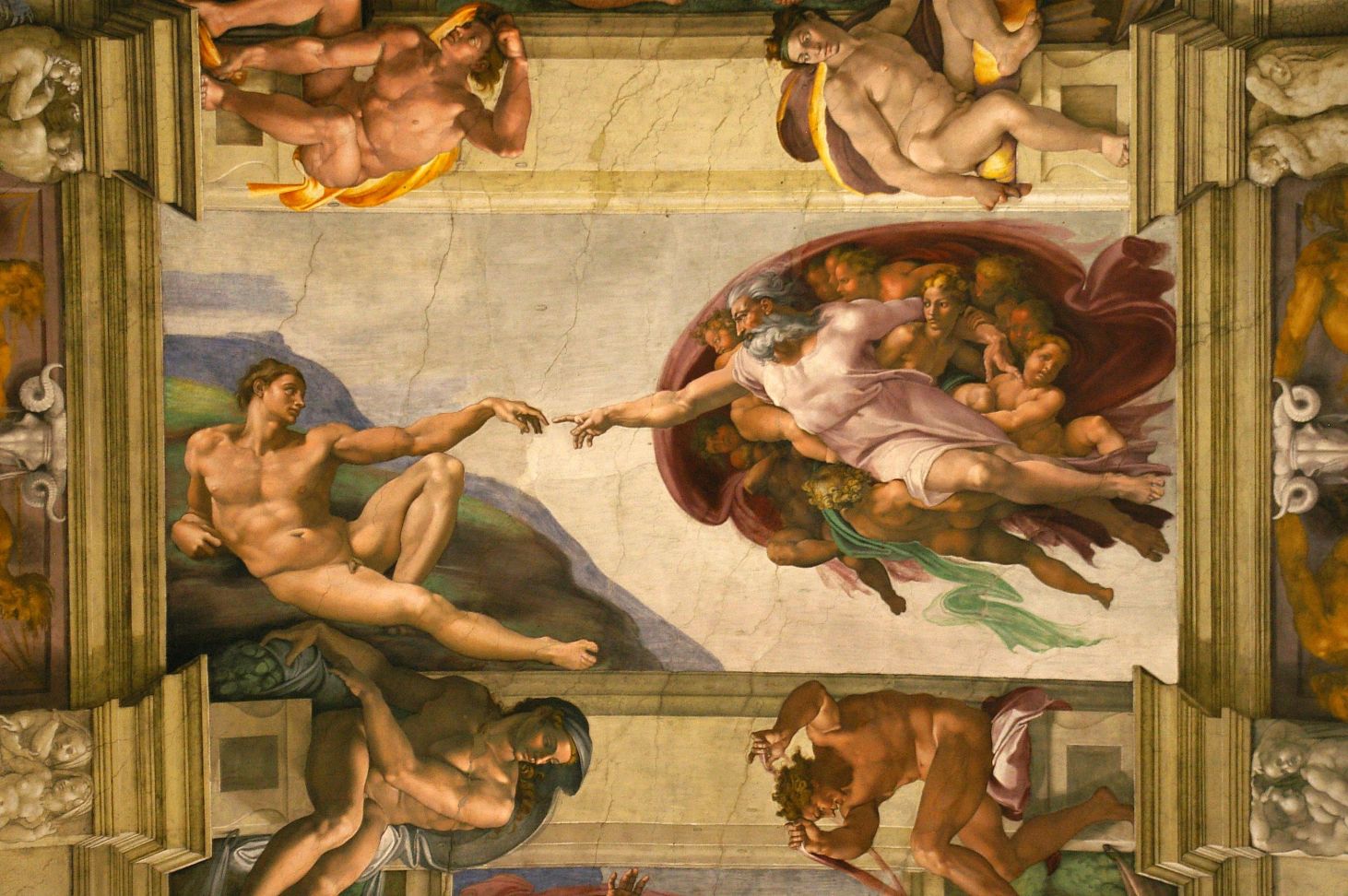 by Meg McDonough, University of Dallas

Why do we exist?  Why is there existence rather than nothing? Does human life have meaning? There are no questions closer to a human soul than these. The answers we choose reach deeply into the heart of life; they permeate each of our words and actions because they determine our very motivation for living. Two famous thinkers represent the two major strains of explanations for existence: Stephen Hawking and Thomas Aquinas. Hawking argued that “the universe can and [did] create itself from nothing” (The Grand Design, 180). Aquinas, to the contrary, argued that God created humankind and all that exists, from nothing, out of “divine goodness” (Summa, Q.44, A.1).  Hawking and Aquinas vastly disagree on why there is something rather than nothing. Either existence is a result of the laws of nature and we are all simply mechanistic organisms, or existence was created by a transcendent God and consequently all people are designed to return to Him again. We should look to each thinker, then, to decipher the answer to the enduring question of existence, so that we might orient our actions accordingly.

In his book, The Grand Design, Stephen Hawking attacks the idea of God as the cause of the universe, arguing that those who posit his existence have taken the question of cause and “deflected [it] to that of who created God” (172).  To him, attributing God with the creation of the universe only pushes back the question of causality one step further and moreover, the addition of the divine is not necessary to explain why there is something rather than nothing.  Hawking attributes the existence of the universe and all that exists therein, the earth, the solar system, all galaxies, matter, space, and time, itself, to “spontaneous creation” (180). The universe, Hawking claims, created itself as a result of chance quantum fluctuations, producing many galaxies, one of which possessed an environment hospitable to human life (139). Justifying the ability of the universe to create itself, Hawking argues that the law of gravity makes possible the coming into being of the cosmos without breaking the known physical laws of the universe.  Because the net energy of the universe is zero and must have been zero at the origin of the universe to avoid something pre-existing its creation, Hawking states that “there must be a law like gravity… because [gravity’s] negative energy can balance the positive energy needed to create matter” (180).  Consequently, Stephen Hawking demonstrates that the entire universe can be produced without a divine creator through its own capabilities. Due to quantum fluctuations, matter, space, and time came to be spontaneously without violating the laws of nature. Seemingly, Hawking has solved the paradox of the universe, though humanity has no greater purpose in its existence as a mere by-product of the Big Bang.

Aquinas addresses the paradox of creation ex nihilo in a different manner.  Instead of arguing that the universe actualized potential to create itself like Hawking claims, Aquinas demonstrates that God is the first principle of the universe.  Aquinas centers his argument for the Christian God as the source of all existence on the proof that there is a transcendent, eternal god who is the efficient cause of being. He addresses the metaphysical quandary of existence, why there is something rather than nothing, by pointing to the fact that no being can bring itself into being, because then it would pre-exist itself (On Being and Essence, 56). One “parent” being must produce the being in question, and in turn, yet another being must produce the “parent” being. The only being which can terminate an otherwise infinite chain of causality, then, is a “self-subsisting being”, a pure existence of being, from which all other beings participate to exist (Summa, Q. 44, A.1). This pure existence of being causes and sustains all being; “all beings apart from [it] are not their own being, but are beings by participation” (Summa, Q. 44, A.1). Using the same foundational logic to prove the existence of a self-subsisting being, Aquinas proves that this necessary being is also the cause of all matter and form in the universe.  Since it is the cause of being as being, this god must be the cause of “all that belongs to [a thing’s] being at all in any way”, meaning that it must cause both the matter which comprises all things and the intelligible form which gives the matter shape (Summa, Q.44, A.2). Because Aquinas attributes existence to a creator, he is also able to discover a deeper answer to the “why” of human existence. He claims that this creator-god is the final end of all things, because “every creature intends to acquire its own perfection, which is the likeness of the divine perfection and goodness” of the creator Himself (Summa, Q.44, A.4). Elsewhere in the Summa, Aquinas demonstrates that this necessary, transcendent and eternal being is the Christian God because it possesses His other attributes of such as Divine goodness, but that argument is for another article. By demonstrating  that some transcendent, eternal being must be the first principle of being and final end of creation, Aquinas proves that the universe did not spontaneously come to be from nothing, but instead it was an intended creation with a designated fulfillment in its Creator.

Juxtaposing the two theories of the origin of being, Hawking’s solution seems to be a shallower explanation of the origin of the universe and all being than Aquinas’ explanation.  He does not assert true nothingness in his explanation of why there is something rather than nothing, but he treats nothingness merely as a state of no matter, allowing a quantum field of some type to exist, and laws of the currently known physical universe to govern the state of nothing. Additionally, scientific critics of Hawking point out that he used the laws of nature to describe how matter, energy, space and time came to be, despite the laws of nature describing only how the above “behave once [they] exist,” and not how these things came to be (Spontaneous Creation). Aquinas, on the other hand, genuinely presupposes no thing to exist when seeking to explain the existence of the universe, and in this way he is able to demonstrate metaphysically that the universe requires a first cause.  In order to prevent the continuous regression that Hawking fails to avoid by requiring a quantum state to exist before the Big Bang, Aquinas successfully demonstrates that there must be an original being who creates all existence and sets it into motion.

Though Stephen Hawking and Thomas Aquinas’s explanations for why there is something rather than nothing seem irreconcilable, their theories are not as diametric as they seem to be.  Hawking’s theory of spontaneous creation is in fact compatible with Aquinas’ assertion that a transcendent, eternal being is the first principle cause, because Hawking presupposes existence of a quantum state and a kind of force which require creation by a creator. Though the theories of creation themselves are not exclusive, the assertions attached to each theory are. If one believes in spontaneous creation and ignores the extant need for a first principle cause of force and quantum fields, there seems to be no purpose for existence and especially human existence, which is simply a serendipitous event. If, on the other hand, Aquinas himself has stumbled upon the “grand design” of the universe, humans must orient their lives towards their end in the Creator, lest they find themselves lost in Hawking’s meaningless existence of chance fluctuations, and perhaps the equally meaningless existence of eternal separation from God.

6 comments on “Why we Exist: Hawking vs. Aquinas”