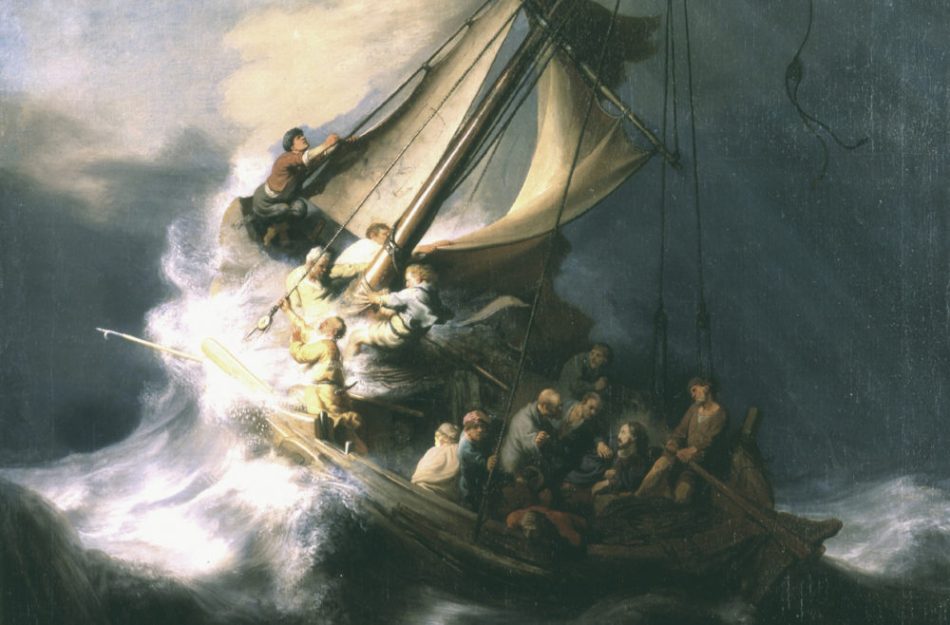 The Clarifying Catholicism writing staff would like to offer prayers and support to all of you who are impacted, both directly and indirectly, by the COVID-19 situation. The following reflection is an opinion piece and does not necessarily represent the views of the organization. What we can say as a unified organization is that we are praying for you every day and are striving to contribute to the common good with our unique talents.

“A furious squall came up, and the waves broke over the boat, so that it was nearly swamped. Jesus was in the stern, sleeping on a cushion. The disciples woke him and said to him, ‘Teacher, don’t you care if we drown?’ He got up, rebuked the wind and said to the waves, ‘Quiet! Be still!” Then the wind died down and it was completely calm. He said to his disciples, “Why are you so afraid? Do you still have no faith?’” (Mk 4:35-41)

Our world, like that of the Apostles, is drowning in a sea of fear. The COVID-19 virus is spreading like wildfire, but I am confident that it will eventually subside. What I am more concerned about, however, is the conduct and demeanor of how we have responded to it. Stores are empty, schools are closed, businesses are shut down, and the mechanisms that uphold this blessed nation are failing. I do not often invoke language of spiritual warfare, but I genuinely believe that the devil is at work, and this crisis is testing the resolve of everything our society stands for. I do not mean to discount the precautions we’ve taken, as many of them are quite necessary, rather I detect a thick fog of fear that we must carefully avoid at all costs so that we may approach this devastating issue from a more calculated angle.

As of writing this, 3,143 Americans have been infected, and 62 have died. The mortality rate is between 1-2% in the US, and the average age of death is around 70-80 years old. As milder cases are reported, the mortality rate is expected to fall. Statistically, these numbers hardly warrant much of the hysteria I will detail below. Caution? Yes. Government intervention? Of course. Extraordinary measures that disrupt our lives for the common good? Definitely. But does this warrant such an intense fear that cripples our entire economy and mechanisms of self-sustainability? A fear that has ruined the livelihoods of workers and taken resources away from those who are most vulnerable? A fear that divides us and compels us to blindly follow power-hungry politicians? Absolutely not. In the face of fear, I propose that the solution to this crisis is the virtue of prudence.

Several theologians, including St. Thomas Aquinas, describe prudence as “right reason and action,” identifying it as the pre-eminent virtue. It is because of prudence that we can carefully and meticulously think before we act. Prudence enables us to evaluate actions in light of the other virtues, such as justice and fortitude. When we think and act prudently, we ensure the good of both ourselves as individuals and everybody around us.

Strolling through the grocery store, staring at the empty shelves of cleaning supplies, I couldn’t help but think of the old, sick, and impoverished persons who were unable to purchase such essentials. Math never lies, and the math says that we young people can handle this sickness, while the elderly, impoverished, and sickly cannot. Why aren’t these people our primary focus? I understand that young people can carry the disease to others, but if containment is out of the question, shouldn’t we emphasize defensive measures for the most vulnerable rather than the general population? Why were the lines at checkout populated with young, healthy, and often rich families, filling shopping carts to the brim with essential supplies that others more desperately need?

These headlines reek of sensationalism and fear. They are not calm, collected, or prudent. Instead, they focus on blame-games, spread misinformation, and worsen the situation. Framing, priming, and agenda setting are three media tactics that were drilled into my head since day one as a Political Science major. With headlines like these blasting in our faces every second of the day, why wouldn’t we fear?

There’s a famous saying “Never waste a good crisis” that all politicians know very well. It can mean one of two things. A positive interpretation is that politicians should use crises to demonstrate effective leadership. A negative reading is that politicians are trained to take advantage of crises to push policies and agendas that ordinarily would have never been accepted. If our government officials were virtuous, this would never be a problem. After all, we need someone to make swift decisions in dire situations. However, in a country headed by a thick bureaucratic system with questionable ethics, I think it is important to be prudent when handling legislation during times of crisis. After all, even the best medicines can have unintended side effects, and it is always important not to overdose.

Nearly twenty years ago, the United States was in a total frenzy, as planes smashed into the Twin Towers and Pentagon, horrifically killing thousands of innocents. Soon after, The Patriot Act was passed. While it was overwhelmingly supported at the time, this controversial law is now detested by many for giving the government the ability to suspend many freedoms on a whim in the name of fighting domestic terrorism. Speaking of which, the War on Terror was heavily supported as a short, simple, campaign in the Middle East. Twenty years later, are troops are still on the ground. Following the success of these measures, President Bush’s approval rating skyrocketed to 90%. As 9/11 faded away, so did public approval of these policies, but not enough to do anything about it.

My purpose in bringing up 9/11 is not to imply that the government was involved in anything nefarious, rather politicians are bred to take advantage of crises to, at best, ensure their re-election or, at worst, advance controversial policies. By this point, I’m sure we’ve heard enough speeches from Rep. Nancy Pelosi and Sen. Chuck Schumer to know that they stand against President Trump, but how does that help us? If anything, Pelosi’s initial relief package for the virus allegedly including support for abortion increasingly muddled her true intentions. Yes, we must trust politicians, but we should also hold them accountable and think for ourselves. God gave us reason for a reason!

The death rate in the U.S. is barely at 2%, and this is how politicians, the media, and citizens conduct themselves? Imagine if the mortality rate was far higher. 10%? 20%? 50%? What would store shelves look like? Would we even have stores anymore? What about the military? Would they patrol the streets breaking up riots? Would the stock market totally crash? Would the government take command of the economy? Perhaps it may be helpful to envision the worst-case scenario: what if a truly nefarious leader was in charge during a crisis?

I recently finished re-reading George Orwell’s 1984. This dystopian society is ruled entirely by fear, though it’s not necessarily fear of the government. Instead, Oceania, Orwell’s society, is in a state of perpetual war, and the government uses said conflict to justify its draconian laws. The media in Oceania constantly sensationalizes the war, affirming the government’s strength by instilling an atmosphere of total dependency on the military, as citizens are brainwashed by patriotic films and chants against their adversaries. A society like Oceania may seem horrific to us, but to its citizens, the existential threat of war compels them to blindly cling to their government. Thanks to Big Brother, everyone is safe, since when we place all of our faith in human institutions, there is seemingly nothing to fear.

“There is nothing to fear but fear itself.” It is rather ironic that this quote comes from a politician, but just as we must hold our leaders accountable, it is just as important to acknowledge their efforts and merits. The government is not an evil force, and there are thousands of good men and women who fight for us every day. In a democratic society, however, the duty and responsibility to ensure progress falls squarely on our shoulders. Thus, we must place our trust in God, who conquers fear, above all human institutions and think critically.

An integral aspect of prudence is acceptance, which means we MUST stay calm. Our world has gone through worse situations. If anything, I thank God that the mortality rate isn’t as high as it could be, as scientists have indeed expected a super-virus to come our way sometime soon. The Coronavirus is here, and it is fatal to our most vulnerable brothers and sisters. However, the more we panic, the more we deprive them of valuable resources and services. Nothing good can be accomplished through fear. Stores are running out of supplies, minimum wage employees have no income, small businesses are ruined, and valuable industries are shutting down. It is crucial that we act prudently and not allow for fear and the devil to guide us. And at the end of the day, I’d rather more young people fall ill and get better than lose so many elderly and sickly because we irresponsibly hoarded resources and abandoned jobs that could save their lives.

“When the people saw that Moses was so long in coming down from the mountain, they gathered around Aaron and said, “Come, make us gods who will go before us. As for this fellow Moses who brought us up out of Egypt, we don’t know what has happened to him.’” (Ex 32:1-5). Humanity has always acted rashly because of fear, and we have supported plenty of questionable leaders out of that same fear. When we blindly follow mob mentalities and participate in fearmongering, we unwittingly commit idolatry by placing total faith in human institutions. This is not to say that non-religious people are automatically trapped by fear. God is reason itself. To think critically, regardless of faith, is an implicit affirmation of God’s goodness. I pray for all of the victims of the virus, especially those who have lost jobs or do not have the means to procure resources they need. But if we allow ourselves to panic, I see only one realistic outcome: if the virus doesn’t kill us all, the fear of it certainly will.

2 comments on “Fear vs. Prudence: A Response to the Coronavirus”