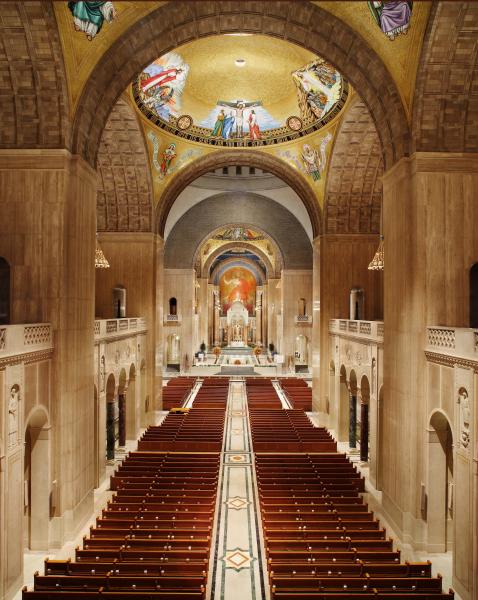 By Jenna Drummond, The Catholic University of America

Two years ago, I made the decision to “be Catholic.” My family raised me practically as an atheist and the only connection to my Roman Catholic roots were the eight years of CCD I had attended growing up. I knew the choice to practice my faith was going to be tested and the support I would have was little to none. There were plenty of times my faith was tested and plenty of times I questioned if I really did believe in the one, holy, catholic, and apostolic faith. Now, entering my second year at The Catholic University of America, and being identified as “super Catholic” by a seminarian friend, I have a few specific people to thank for their help in my faith journey.

Now, some of these people I have actually never met. In fact, there are very few I have the pleasure of calling “friend” in real life, but their impact has been dramatic nonetheless. Even though I have never met them, and I question if they even know I exist sometimes, watching them live authentic and Catholic lives online has had one of the biggest impacts on my faith life.

Coming back to the Church I did what any curious 16 year old would do and I googled my questions. Embarrassed at my ignorance of the faith I was baptized into, I did not feel comfortable going to my parish priests, or anyone else for that matter for answers to my billions of questions. As search results came up, I noticed many of these websites had Twitter and Instagram pages which would hold Q&A nights or post stories and links which could answer more questions I had. Following those pages lead me down the rabbit hole of a following spree. Soon I was up to following a few hundred people, most of them Catholic speakers, priests, sisters, brothers, or just laity who engaged with questions people asked them.

It did not take long for me to realize the people I followed were not only just answering questions about the faith or holding discussions, but were also just living their lives. They frequently made posts about their children, spouses, relationships, jobs, and other normal things. It shocked me that people who were SO Catholic could also be so normal, that they could go into the world and preach the Gospel just by their actions, without even saying the name Christ. By reading their posts you could tell they truly embodied the phrase “ad majorem Dei gloriam” or “for the greater glory of God.” They found God in even the most secular environments and witnessed to His unconditional love in the hardest of times. These people showed God’s goodness by sharing their personal victories and triumphs. I’ve read stories of how they overcame sin, about their growing families, and about the blessings they received.They also showed their humanity and personhood by acknowledging that even when you are a faithful Catholic there are bad days. They shared stories of abuse, depression, miscarriages and stillbirths, death, loss of job, and loss of home.

Through this community I have found a family.

One of the biggest impacts Catholic social media has had on my life has been the humanization of religious life. Growing up, priests and sisters scared and intimidated me. When I came back to the Church, I did not feel comfortable interacting with them because they were too holy for a sinner like me. I had no clue how to approach them or ask them questions – that was until I saw them on Twitter. From seeing the Daughters of St. Paul (#medianuns) answer questions about Religious Life on Instagram stories to seeing priests joking with each other and the laity in the comments of Twitter posts, or even seeing Bishop Umbers of Australia posting memes, and consequently giving them up for Lent this past year, these sisters, brothers, and fathers became people, not just sacrament machines and those predestined for heaven.

It was through Twitter that I met one of my dearest friends, Fr. Cassidy Stinson, then only a deacon. We followed each other after having been put in a giant group chat together, and one day he reached out to me saying he wanted to meet internet friends in real life. Months after our initial meeting I had the opportunity to see him ordained a Priest of Jesus Christ, and to attend his first Mass. To think that such a beautiful friendship started out as commenting on each other’s tweets is truly amazing.

Though social media is usually under fire and seen as an evil, I would like to highlight some of the good it does, especially in the context of the Catholic world. It connects people to each other. It allows questions to be answered. It allows petitions to be prayed for. It allows for community to be formed. The beauty of the internet is that which comes from it unexpectedly. When I was 16 googling those questions, I could have never imagined knowing the people I do now, and I could have never imagined seeing the body of Christ so active, and so alive, in my life.

So thank you Twitter, Instagram, Facebook, etc. for allowing me to fall deeper in love with my religion and my God by connecting me with those who live authentically Catholic lives.