Spiritual Warfare: What Can WE Do? 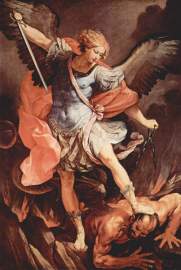 The last two weeks have been a trying time for Catholics. Faced with recent scandals involving high-ranking Church officials, Catholics are now asking themselves what has happened to their beloved Church. How could so many bishops, successors of the holy apostles, become wolves in shepherds’ clothing who prey upon the very sheep who, by virtue of their apostolic office, they are entrusted to protect?

I will not attempt to explain the worldly causes of the crisis here; that is a task better left to authorities who are more equipped to conduct a thorough investigation. Instead, this article will focus on the spiritual cause of the crisis and what we as baptized Catholics can do about it.

On August 24, Bishop Frank J. Caggiano of the Diocese of Bridgeport instructed all priests in his diocese to recite the St. Michael Prayer at the end of their Masses. “Christ has conquered sin and death, but we are still in the midst of spiritual battle,” Bishop Caggiano said. “For that reason, I would like the Prayer to Saint Michael the Archangel recited.”

Why a prayer to St. Michael the Archangel? The St. Michael Prayer was written by Pope Leo XIII in 1884 after he heard a mysterious conversation between Satan and Christ while celebrating Mass in his private chapel:

Satan: “I can destroy your Church.”

Satan: “To do so, I need more time and more power.”

Christ: “How much time? How much power?”

Satan: “75 to 100 years, and a greater power over those who will give themselves over to my service.”

Christ: “You have the time, you will have the power. Do with them what you will.”

Leo XIII was so disturbed by what he heard that in 1886 he decreed that the St. Michael Prayer should be recited at the end of every low Mass throughout the universal Church. Although this decree was eventually repealed in 1965, Pope Saint John Paul II nevertheless urged Catholics in 1994 to pray the prayer daily, demonstrating that the St. Michael prayer remains crucially important to the spiritual life of the Church to this day.

Why did Bishop Caggiano restore the St. Michael Prayer in his diocese? Simple. Caggiano understands that at the heart of this coverup crisis, there is a spiritual war being fought between the Bride of Christ and the Father of Lies.

We as baptized Catholics are empowered to fight this spiritual evil by arming ourselves with the St. Michael Prayer. I urge you all to write to your bishops asking that the St. Michael Prayer be restored at the end of every Mass following the example of Bishop Caggiano. When Leo XIII implored the intercession of St. Michael, he knew that the Church would be attacked. Now is the time to fight. Write to your bishops to help the Church win its battle against Satan.

I conclude this article with a prayer for Holy Mother Church:

St. Michael the Archangel, defend us in battle. Be our protection against the wickedness and snares of the devil. May God rebuke him, we humbly pray, and do Thou, O Prince of the heavenly hosts, by the power of God, cast into hell Satan and all the evil spirits, who prowl about the world seeking the ruin of souls.

A sample email template is provided below:

By now, the entire Catholic world has become aware of the recent scandalous revelations. The Holy Father, in his recent letter to the People of God, recommended to us all prayer and acts of penance in reparation for the sins of abusive clerics, and for the healing of their victims.

I have become aware that Bishop Caggiano of the Diocese of Bridgeport (in a statement which can be read here: https://www.bridgeportdiocese.org/bishop-announces-plans-f…/ ), has announced that he expects the recitation of the prayer to Saint Michael the Archangel at the end of every Mass immediately before the recessional hymn, beginning on the Memorial of Our Lady of Sorrows. This is an excellent thing which he has done, and I humbly ask that ___ would also consider introducing the Leonine Prayers at the end of every Mass in the Diocese of ____.

Thank you for your time. 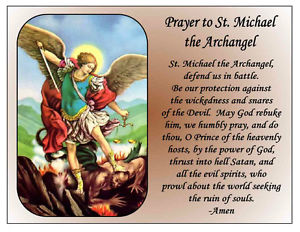