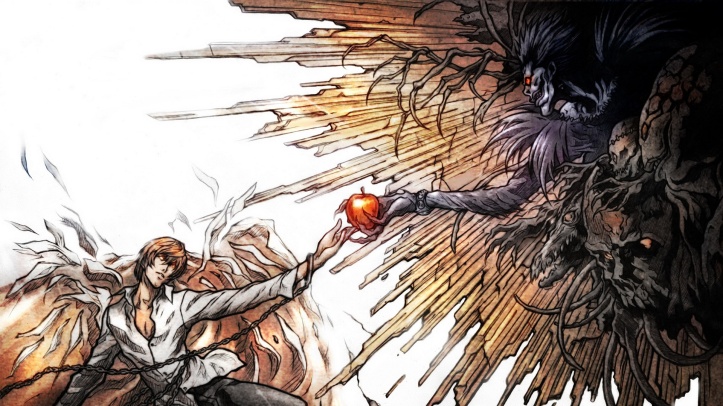 If you’ve never seen the popular Japanese animation, Death Note you’d probably think it’s just a grim and dramatic adult cartoon that looks like its characters came out of a Hot Topic store. Even though this anime, at first, may not look like it’s worth your time, the lessons you can learn from the story can help you with your faith.

Let’s talk about the basic plot of Death Note. The story is about an honors high school student named Light Yagami who ends up finding a notebook that is dropped by a Shinigami, a Japanese god of death. The Shinigami’s notebook gives Light the power to kill whoever he wants to by simply writing their name in it. After using the notebook to kill a criminal Light decides to use the power of the notebook to enforce his own brand of justice as a vengeful judge in secret. Light’s first criminal killing represents a scenario that every Christian is left with when they sin.

When Light commits his first kill, he is initially plagued by the guilt that comes with killing a human being. Light chooses to live with the guilt by justifying his actions, claiming that it was right for the man to die and that it is morally good to rid the world of criminals. Light transforms from an average student to a man hell-bent on executing wrongdoers with his notebook, to the point where he begins to refer to himself as a god. This mirrors American social psychologist Leon Festinger’s Theory of Cognitive Dissonance. This theory is as follows: “The notion that we experience discomfort, or dissonance, when our thoughts, beliefs, or behaviors are inconsistent with another.” In layman’s terms, when we perform an action that goes against what we believe, it creates an internal struggle. Light exhibits Festinger’s theory by dealing with his actions of killing in a manner where he justifies each death, even though it goes against his initial moral code. Essentially, by considering himself a god Light can justify his actions because they fit his beliefs.

How does this apply to Christians? Well, Christians also deal with Festinger’s theory each time they sin. Allow me give an example. Let’s say I were to punch a friend in the face out of anger, an action that is most definitely a sin. I could go confess my sin to a priest and confront the problem, or I could make an excuse for it and accept the action as a part of my personality.

Light’s actions show what happens when a person comes up with an excuse for a bad action, rather than taking responsibility for it. Because Light decided to excuse his killings, he became a killer who brought more harm to the world instead of making it a better place. Just like Light, if we make excuses to justify our wrong actions, instead of taking responsibility and confronting our problems, we will end up harming ourselves and not becoming the saints that God wants us to be. Thank you for your time. Now if you’ll excuse me, I’m going to get back to watching Attack on Titan.